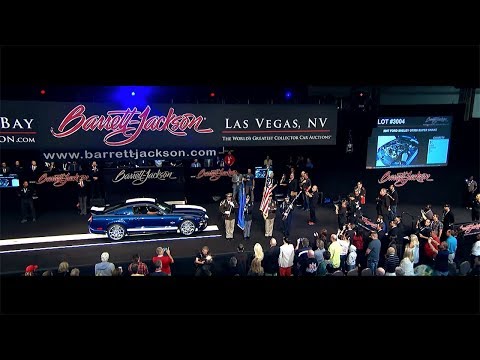 From the personal collection of Barrett-Jackson President Steve Davis, this rare historical Shelby crossed the auction block at the 2017 Las Vegas Auction, with the $1 million sale price benefiting Las Vegas first responders through the Injured Police Officers Fund. The car, which had less than 900 miles on it at the time of the sale, was originally purchased by Mark Fields, former CEO of Ford, and as a result carries the ultra-low VIN 007, making it one of the first GT500s built since 1970. The car was used by Shelby while it was owned by Mark Fields as a R&D vehicle in the initial development of the 40th Anniversary Package. Included with the sale of the car was a special book signed by Carroll Shelby that documents the vehicle’s development, as well as a framed copy of the Window Sticker signed by Carroll Shelby and Bill Ford. This spectacular GT500 has also been the recipient of a very special 600+ horsepower Super Snake 40th Anniversary Edition conversion by Shelby under the watchful eye of Carroll Shelby himself and assigned the CSM #07SS0011. The car also has the distinction of being the only car Carroll Shelby personally authorized to be equipped with white stripes, which at the time was not readily available as an option. This fine example of Ford and Shelby history had not been shown or displayed publicly since its completion and had lived a pampered existence as part of the Davis family.